A Sudden! Nearly 40 Barrels Of Chemicals Have Leaked! The Main Person in Charge Is Under Police Control!

According to the emergency management bureau of Wuhan Jiangan District, a chemical leak occurred at around 5 o 'clock on August 29 in room 807 of Kaixin Building, a commercial and residential building in the district.

After the incident, the municipal and district emergency response, public security, fire protection, and street immediately took measures to eliminate the dangerous situation, such as ventilation, adsorption and other measures, no fire and injuries.

At present, the main person in charge of the company involved, Wuhan Fuxin Chemical Co., LTD., has been detained by the police, and the leaking chemicals have been transferred to a special warehouse, which will be closed after on-site disposal.

At the same time, the city and district departments have started the investigation and handling of the leakage risk.

There were also reports of smoke and a strong pungent smell at the scene, and the chemical was white and granular, prompting the evacuation of office workers in the building.

At about 2:13 p.m., the chemicals that had been transferred to the truck suddenly exploded, sending white gas soaring into the air and spreading all around.

Disposal personnel analysis, it is estimated that the temperature was too high, the chemical volatile in the sealed space, expansion, and then produce explosion.

At about 3 p.m., the truck loaded with chemicals left the scene. 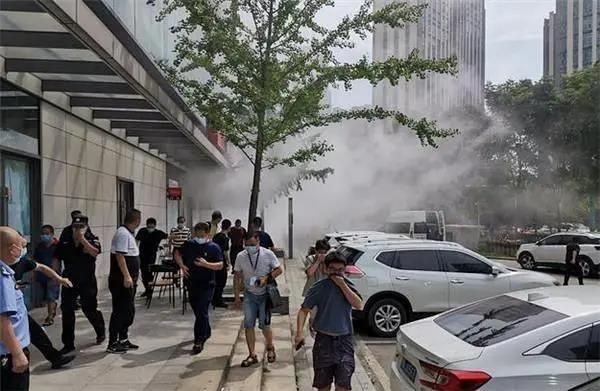 After investigation, it has been learned that the company involved is Wuhan Fumou Chemical Co., LTD., which is a chemical operation unit. It rented room 807 of the personal commercial and residential building in March 2018 and recently stored medicine and pesticide materials.

By consulting the enterprise information, we can see that the business scope of the company is permitted to operate hazardous chemicals; Food Internet sales; Pesticide wholesale; Pesticide retail; Import and export of goods; Technology import and export; Drug Internet information service, etc.

Further excavations by media revealed that nearly 40 barrels of chemicals were stored in room 807. The leak was mainly of chemicals used to make medical supplies. The exact quantity and cause of the leak are yet to be investigated.

"[Dangerous chemicals] were stored in residential and commercial buildings, which is a clear violation." Emergency management personnel pointed out that according to the requirements of Chinese laws and regulations, hazardous chemicals should be stored in special warehouses, special sites or special storage rooms, and be managed by special personnel.

Short comments: The storage of dangerous chemicals not only needs a good quality container, its seals also need to meet certain requirements, we can provide high quality steel barrel seals to protect every barrel container.