The circular economy has received specific support from the governments of Germany, Japan, China and the European Union.

Germany is the first European country to pass national legislation to reduce the amount of waste sent to landfills. In the early 1990s, laws including the Closed Material Recycling Waste Management Act created a framework for what came to be known as extended producer responsibility. In essence, environmental policies enforce laws through local enforcement that mandate manufacturers to recycle packaging materials and reuse or recycle those materials where feasible.

In 2015, the European Commission adopted a detailed action plan that recommended "a transition to a more circular economy in which the value of products, materials and resources is maintained for as long as possible." Importantly, the action plan states that business "is key to driving this process forward".

Unfortunately, many EU Member States define almost all used products, including packaging, as' waste ', which often severely and unnecessarily limits the options for reuse and recycling. At every stage of the collection and treatment process, waste is subject to a series of restrictive management rules that add unnecessary costs and liabilities. In addition, the laws of many EU countries combine the definitions of consumer and industrial packaging, even though the two are dealt with in completely different post-use management systems and should therefore be treated separately.

In 2000, the Japanese government passed the Law on Promoting efficient Use of Resources, also known as the Basic Recycling Law. The law addresses the entire life of products and requires manufacturers to operate demolition plants that prioritize recycling materials.

In 2008, China passed the Circular Economy Promotion Law, which established a circular economy administration department responsible for formulating circular economy development plans and making specific provisions on activities controlled by governments at all levels. It also requires Chinese manufacturers to be responsible for recycling or making harmless empty or discarded products or packaging. Even in these countries, implementation of circular economy projects remains patchy. Still, it's clear that governments around the world are taking the concept seriously. 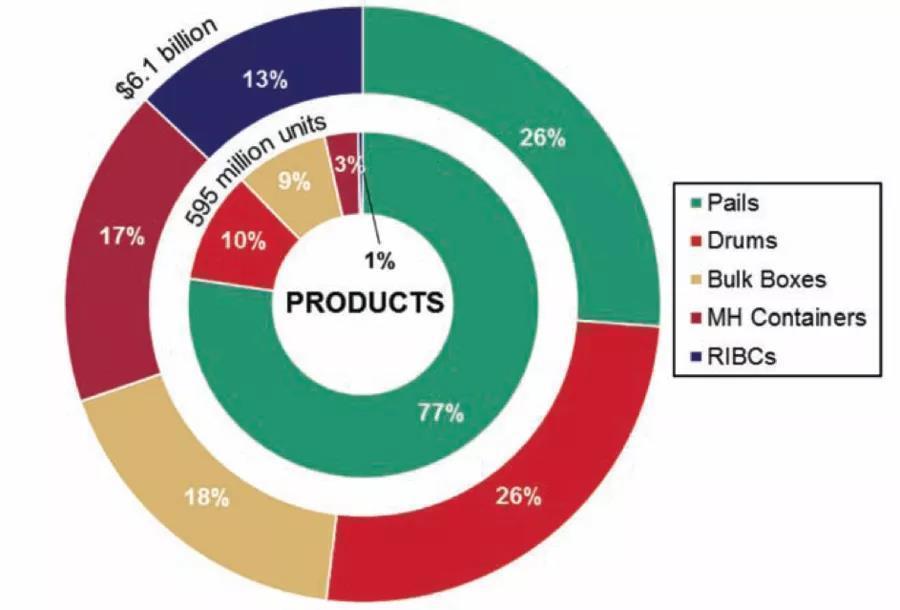 The International Container Conversion Federation estimates annual production of the three containers in Japan, Europe and North America at about 120m steel barrels, 30m plastic barrels and nearly 16m ibCs. Figures for other large industrialised economies such as China and India are not yet available, but ICCR believes a reasonable figure would be more than double the stated output.

Today, a global empty packaging management network of private companies that collect, transport, clean, refurbish and resell steel drums, plastic drums and composite intermediate bulk containers is mature. With few exceptions, no matter where one goes in the world, one can find a repairman who can safely collect, clean and dispose of industrial empty packaging for reuse.

Interestingly, this global system has grown and prospered because containers almost perfectly fit the criteria of a model circular economy product. Take the remarkable 55-gallon steel drum, a global staple of industrial packaging since its invention in the early 20th century, admired worldwide for its safety, durability and reusability.

55-gallon steel drums are produced all over the world in the same shape, size and material. Except for a few small gaskets, the necessary lining and decorative coating, which add up to less than 2% of the total weight, the steel drum is made entirely of carbon steel. Even after the end of the barrel's useful life, containers and caps can be recycled after cleaning.

Steel drums produced in Japan and shipped with the product to North America can easily be prepared for reuse in refurbished facilities. The Reusable Industrial Packaging Association, which represents industrial packaging renovators in North America, reports that its members operate more than 120 plants collecting, refurbishing and reselling more than 25 million steel drums annually. They also reprocess millions of empty plastic drums and composite ibCs.

"Steel drums retain surplus value when empty because they can be cleaned and reused many times for a wide range of products," said Dan Burek, president of RIPA. "And, when the drum can no longer be used for its original purpose, it and its components still have value as a recyclable material."

"Because of its consistent approach to design and construction," Burek continues, "empty industrial packaging has become a global currency in almost all industrialized countries." Not only are the barrels valuable in the aftermarket, replacement parts such as closures and gaskets can be easily purchased from local businesses.

A study reported by N-Greases (Ernst & Young) published in April 2014 found that manufacturing and single-use use of new open-end steel drums resulted in approximately 77.3 pounds of CO2 emissions, while using used open-end steel drums reduced carbon emissions by 60% to approximately 30.1 pounds. A similar comparison shows a reduction of about 36% in emissions from closed steel barrels.

In a linear economy, packaging manufacturers can claim environmental benefits by reducing the amount of materials used to produce a particular product. A steel bucket manufacturer can use thinner steel to make a bucket, or a plastic water bottle manufacturer can reduce the number of plastic water bottles. However, lighter steel drums may only be reused once for the original purpose after the initial round trip, after which they must be recycled. Plastic bottles are almost certainly recycled after a trip.

In a circular economy, manufacturers and product buyers will be expected to examine the life cycle of products and optimize their environmental value. Since steel drum manufacturers know that a global recycling and reuse system exists for their products, they will be expected to produce a tougher drum made of thicker steel to facilitate multiple reuse cycles. On the other hand, plastic bottle manufacturers may find that there is no effective recycling and reuse system in each market, so the most effective environmental solution for plastic bottles sold in these places is to reduce raw materials in the production process, plus local recycling.