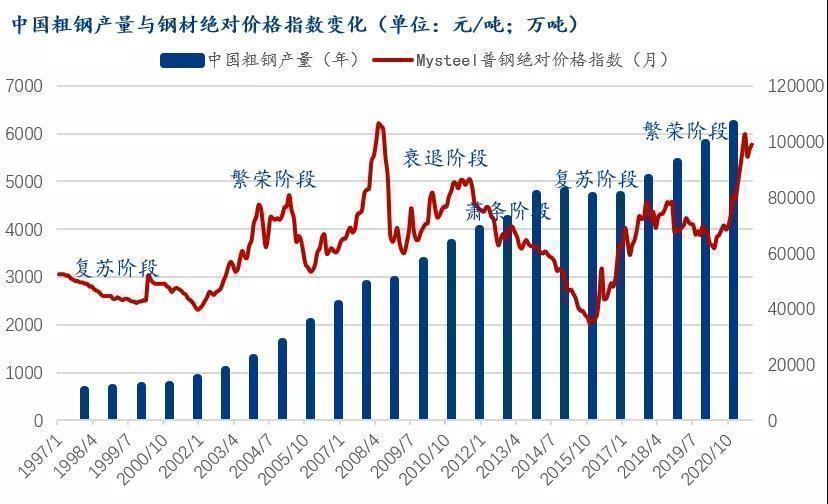 1. What is an economic cycle?

Economic cycle refers to the regular expansion and contraction of economic activities along the overall trend of economic development. It is generally divided into four stages: prosperity, recession, depression and recovery. It graphically shows recession, trough, expansion and peak. Under the condition of market economy, the cyclical changes of economic situation always affect the rise and fall of all walks of life.

2. Evolution of iron and steel industry development in economic cycle

Following the law of economic cycle change can be an important magic weapon for medium and long-term market investment. As a basic industrial product, steel, economic cycle is the most important factor affecting the change of steel price. The changes in the steel market in the past 20 years can be roughly divided into two cycles. The first cycle is before 2002, the prosperity stage is 2003-2008, the recession stage is 2009-2012 and the depression stage is 2013-2015; The recovery stage of the second cycle is from 2016 to 2019, and the second cycle is from 2020 to now, which is a prosperity stage.

The corresponding change of price volume relationship is as follows: in the recovery stage before 2002, the crude steel output increased slightly and the steel price fluctuated and rose; During the boom period from 2003 to 2008, the output of crude steel increased geometrically and the price of steel doubled; In the recession stage from 2009 to 2012, crude steel production continued to grow and the price fluctuated at a high level; In the recession stage of 2012-2015, crude steel production peaked and fell, and prices continued to decline. Since 2016, after the supply side reform of China’s iron and steel industry was proposed, the state has continuously issued counter cyclical adjustment policies, accelerated the recovery of the iron and steel industry, realized the simultaneous increase of price and volume, and now entered the stage of green and high-quality development.

3. Iron and steel industry under the new situation of green development

Facing the complex economic environment at home and abroad, China continues to deepen reform, strengthen counter cyclical regulation and deal with the downward pressure of the economy. Since the 14th five-year plan, China has also put forward higher requirements for the development of the iron and steel industry. At this stage, under the new situation, China has put forward the grand goals of "reaching the peak of carbon" by 2030 and "carbon neutralization" by 2060, which also indicates that China's iron and steel industry will be guided by green environmental protection in the future.

Short comments: The boom period of both price and volume will continue for several years, and the historical low of steel price in 2016 will be difficult to occur in the future. At the same time, the future profitability of steel production enterprises will probably maintain a high level for a long time.